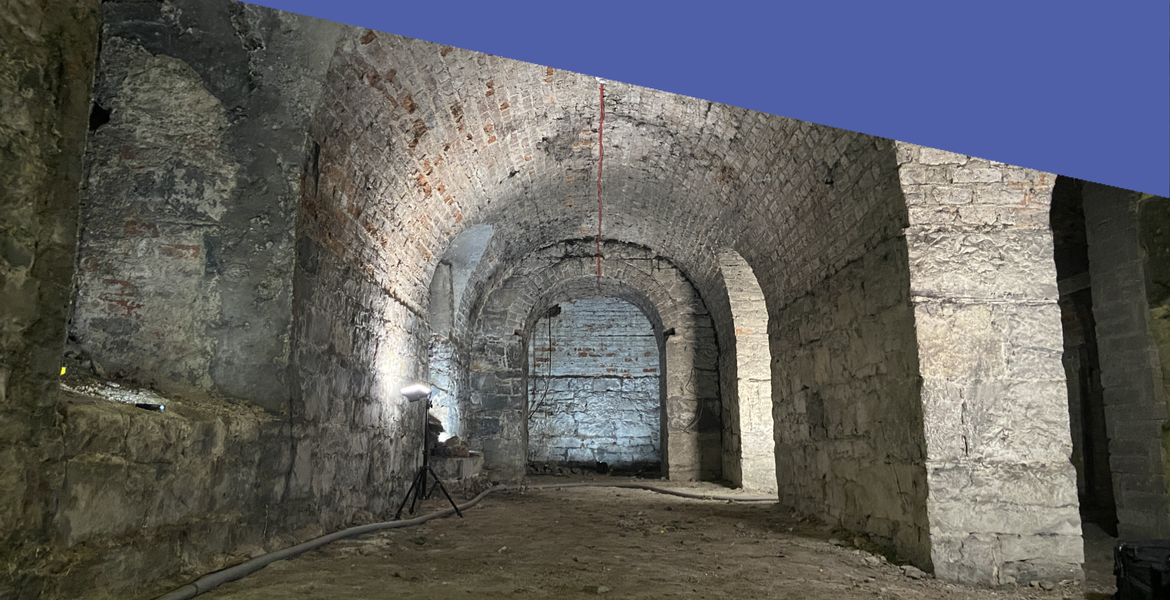 The Cellars of the City – Time and Terrain

'In discerning the relationship of Limerick’s Newtown Pery to its physical foundation - from the ground up – a desire arises here to unearth its intelligence as a living system capable of present and future appreciation in its entirety.

Yet - unlike the parcels of house or terrace development - when a new street or set of streets was developed the streets and pavements were communally raised up, and the gardens or yards behind the houses were left at a lower level, usually representing the original ground level. In effect the new streets and pavements operate as a very purposeful ‘raised deck’ over an extensive infrastructure of barrel-vaulted cellars - originally for coal bunkers fed from coal holes from the pavement above - as well as central culverts for dealing with waste outfall from properties. Terraced houses typically opened straight onto the street, often with a few steps up to the door preceded by an open space or ‘area’, protected by wrought iron railings, dropping down to the basement level.

Having understood the increment of the house it is only then when you again retreat again to a larger scale that you realise Newtown Pery’s inherent intelligence. The ‘raised deck’ street system of Georgian Limerick is at a purposeful tilt of five degrees from its highest point at Baker Place towards down to Sarsfield Street that allows for the natural gravity fall of waste water. One can only speculate that ground rules dictating the vast network of chimney partywalls, cellars and perpendicular culverts were planned from the outset. Each culvert perpendicular to the Shannon River is served by an outfall at the quays that flushes the wastewater at each tide.

With the radical thinking presently required to deal with the implications of Covid-19, one would hope that we can begin to rethink our city’s public realm where intertwined public and private interests can be absorbed and where we can begin to think again from the ground up. This reimagining  can start with the view from below. Our fundamental health depends upon its full understanding and its full utilisation.'

This project is funded by the Arts Council of Ireland's Engaging with Architecture Scheme.

Open House Limerick 2021 is funded by the Arts Council of Ireland, Heritage Council and Limerick City and Council Culture and Arts Office.

Open House Limerick is sponsored by Roadstone and RIAI and supported by the Irish Architecture Foundation, Open House Worldwide and Limerick.ie.